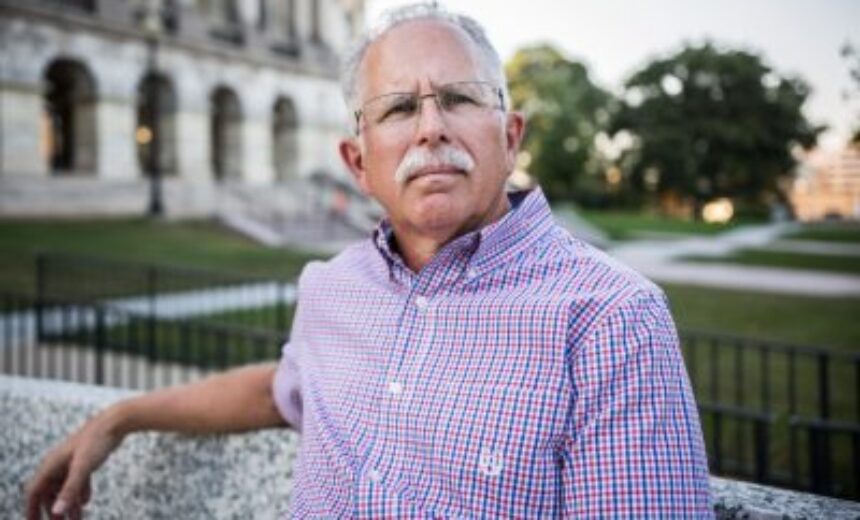 By John Copley
Unions representing the Capital Region’s large public-sector workforce are swinging into action, trying to inspire loyalty in their ranks in case — as they expect — the U.S. Supreme Court gives some workers a pass on paying dues.
The top court heard arguments last week in Janus vs. AFSCME and is expected to issue a potentially far-reaching ruling in June on whether unions can force payment of agency fees, which are a substitute for dues paid by workers it represents and on whose behalf it negotiates, but who aren’t formally members.
In Sept. 2017, AdjunctNation reported that the nation’s four largest public-sector unions — the National Education Assn., the American Federation of Teachers, the Service Employees International Union and the American Federation of State, County and Municipal Employees — sharply criticized the case, calling it “a blatantly political and well-funded plot to use the highest court in the land to further rig the economic rules against everyday working people.”
In 2016, AdjunctNation published “Why Every Adjunct Should Be Watching Friedrichs v. the California Teaching Association.” That case, also a challenge to agency payer fees, ended in a 4-4 tie by the justices of the U.S. Supreme Court, after the death of Justice Scalia.
In truth, agency fees are imposed on tens of thousands of faculty nationwide, many of them adjuncts. A look at the AAUP’s 2014 LM-2 financial report filed with the U.S. Department of Labor shows that 11,106 of the group’s 49,444 members are agency fee payers. Only 4,637 of the AAUP’s total members are part-time faculty. In 2010, the AAUP had 48,694 members 4,103 of whom were part-time and 7,977 of whom were agency fee payers.
The largest growth segment of membership for the AAUP between 2010 and 2014 did not come through the addition of either newly-organized full-time or part-time faculty, but rather through the addition of agency fee payers.
American Federation of Teachers’ headquarters in Washington, D.C., reported no agency fee payers on its 2014 LM-2, stating on its financial disclosure that agency fee payers are not considered members of the union. However, in 2014 multiple state AFT chapters took forced fees. New York State United Teachers (NYSUT), the largest AFT affiliate, took agency fees from 23,365 nonmembers. AdjunctNation has written repeatedly about NYSUT and its leaders’ penchant for negotiating so-called equal percentage raises. Such negotiating tactics rob adjunct union members and agency fee payers and shift exponentially more in compensation to full-time union members. AFT affiliate California Federation of Teachers reported 12,212 agency fee payers and 55,647 willing union members.
The Janus case has taken on significance beyond Mark Janus, a child-support specialist at the Illinois Department of Healthcare and Family Services.
The organized labor community calls it a key battle in an ongoing effort by conservatives and big business to further weaken organized labor, which already is significantly diminished from its mid-20th-century peak of size and influence. Losing the case also could reduce the money available to unions to organize workers and spread their message.


Conservatives and free-enterprise activists on the other hand see the Janus case as a matter of freedom of speech: forcing someone to pay a union amounts to forced support of the union’s positions.
Many in the organized labor community expect the conservative-dominated Supreme Court to rule against AFSCME, the American Federation of State, County and Municipal Employees.
So they’re taking steps now to remind public-sector workers how much they get from the unions, and what their agency fees accomplish.
“We continue to have a focus on member engagement, not just due to Janus,” CSEA spokeswoman Shannon Hutton said. “We’re literally going door to door.”
Civil Service Employees Association dues average $600 a year for members. In most cases, the agency fee for non-members CSEA represents is the same as dues for members in the same bargaining unit. Hutton said CSEA has a 93 percent membership rate and actively tries to reach and educate the other 7 percent, some of whom don’t even realize they are not members.
Scott Gartland of Halfmoon, a CSEA member and Fourth Judicial District court officer, said public employee unions’ attempts to move into private-sector representation may have helped make Janus vs. AFSCME such a hard-fought battle.
“The anti-union lobby will keep continuing to tweak cases until they find a court that rules in their favor, and this could be the one,” said Gartland, who’s also a CSEA local officer. “I believe the public employee unions are the last stronghold of organized labor in this country. What I fear the most is if the anti-union entities win this case, they will not stop there.”
Gartland sees this not as labor’s “darkest hour” but an “opportunity to shine.” It’s a chance to remind the public, unionized or not, that much of what they take for granted — sick leave, vacation, a five-day 40-hour work week, workplace safety rules, child labor laws — came through the efforts of organized labor.
One of the entities adding its voice to the debate has been the Empire Center for Public Policy. The Albany-based nonprofit think tank is independent and non-partisan, and as such does not take a position on Janus vs. AFSCME, said its policy analyst, Ken Girardin.
However, he said, “Ending compulsory agency fees would be a good thing for all involved.”
If every non-member stopped paying agency fees to the unions, they’d save a total of $110 million, he said, and this would force unions to be more responsive to their members, rather than “treating them like cash machines.”
This isn’t an existential threat to organized labor, Girardin added: Roughly half the states don’t require payment of agency fees, and public employee unions are alive and well there.
On the issue of agency fees, many state leaders are standing with the unions.
Gov. Andrew Cuomo, in his State of the State presentation, mentioned Janus vs. AFSCME and noted the Supreme Court’s ruling in the case might override some New York state rules pertaining to public employee unions. He said he would do everything in his power to “preserve workers’ rights and protect the right to organize and collectively bargain.”
Legislation has been introduced in both the Assembly and Senate to make it easier for unions to collect agency fees and harder for state employees to opt out of them. Assemblyman Phil Steck, D-Colonie, who signed on as a co-sponsor of the Assembly version, said he expects the Supreme Court to rule for Janus and undercut decades of progress by organized labor.
“I certainly support the agency fee,” he said, but he also cautioned that the Supreme Court ruling might make it difficult for the state to pass an effective measure of support.
“People forget the Supremacy Clause of the [U.S.] Constitution,” he said.
The largest of the state’s public employee unions, the over-600,000-strong New York State United Teachers, said Janus vs. AFSCME has significance beyond organized labor: A 2017 study showed the presence of unions raises standards for non-unionized workers in the same marketplace.
“That’s why this case is so important,” spokesman Carl Korn said.
To prepare for the ruling, NYSUT has been educating its members about the benefits their union provides them, he said.
“We are confident that our members see the value in having a voice on the job, not only to fight for better pay and benefits but also to defend public education and ensure students have what they need.
“NYSUT members very clearly see that wealthy special interests are attacking our voices, our values and our unions.”
Like CSEA, NYSUT is looking for new membership in new places, as there is a finite number of public school teachers it can organize. Its membership shrank slightly during the Great Recession but it recovered and has been growing slowly since, with new members as diverse as lifeguards, retirees and hospital nurses.
Another new frontier is non-traditional schools: Just last month, NYSUT gained 99 new members at a Lackawanna charter school.
United University Professions President Frederick Kowal said he had been expecting a showdown like Janus since before Janus hit the courts.
Two prior cases were very similar in their potential effect, he said, and one was stalled only by a 4-4 Supreme Court deadlock after the death of Justice Antonin Scalia.
“When Donald Trump was elected, I could see the handwriting on the wall,” Kowal said.
So UUP, which represents 42,000 faculty members on 30 SUNY campuses, began engaging the membership to get them more involved in their union.
About 5 percent of those represented by UUP are not UUP members, and some of those are adjunct faculty in remote locations. These people may be the ones most likely to not pay their agency fees if the Supreme Court tells them they don’t have to, Koval said.
“They’re immediately going to stop paying their fair share, but we’re going to continue to reach out.
“No member is ever lost.”
AAUP, adjunct faculty, AFT, agency fees, higher education news, higher education union, Mark Janus, NEA, part-time faculty, SEIU