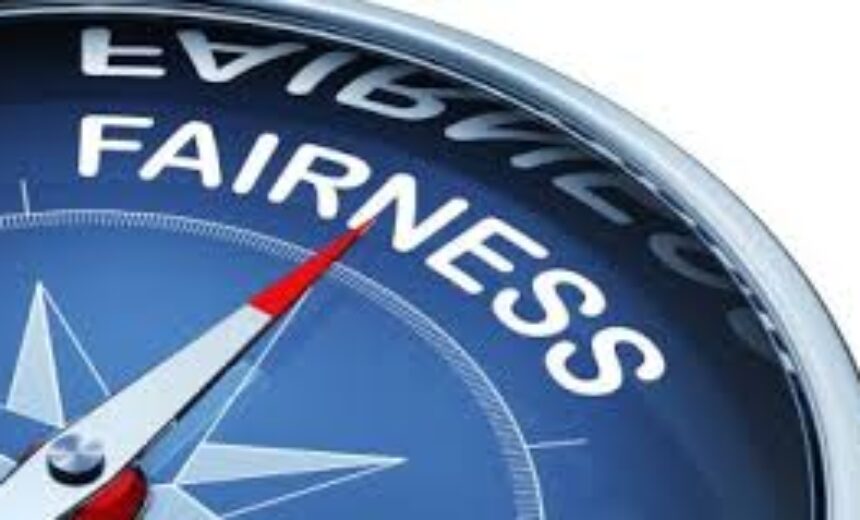 Some people I know are under the impression that pay “parity” and pay “equity” mean the same thing. They’re wrong, of course. Those two words are not synonyms.
Here’s the definition of pay “parity”:
par·i·ty 1 (pr-t)
n. pl. par·i·ties

1. Equality, as in amount, status, or value.
[Latin parere, to give birth, bring forth; see per-1 in Indo-European roots + -ity.]
Put simply, it’s a system under which there is absolute equality. If you earn $100,000 for teaching four courses, and I teach one course, I get $25,000. No ifs, and or buts. We have pay parity. Pay “equity?” Now there’s a slippery slope. Equity is about “fairness,” and fairness, well, that leaves loads of room for interpretation. I can define fair to mean whatever I want so long as we both agree it’s fair. Think I’m crazy? Well, in California, when the labor unions got the state to dole out $57 million is equity pay to the state’s 38,000 part-timers, individual local leaders negotiated “equity.” You’d think they’d just negotiate equity at 100 percent, right? Wrong. At one California community college, equity for the purposes of distributing the state money, was defined as 58 percent of what a full-time faculty member earned.

Here’s the definition of pay “equity”:
n. eq·ui·ty 1
1. a: justice according to natural law or right ; specifically : freedom from bias or favoritism b:something that is equitable
[Middle English equite, from Anglo-French equité, from Latin aequitat-, aequitas, fromaequus equal, fair]

Now, answer me one question: Do you want pay parity, or do you want someone to negotiate pay equity on your behalf? And no, I’m not trying to irritate you with silly questions.
Equal pay for equal work: That is the definition of pay parity.

I predicted earlier in the month that the AFT’s FACE boondoggle would fade away in 2009. (If you don’t know about FACE, I’ve written about it here and here.) A few days later, AFT’s FACE man Craig Smith wrote about “The Future of FACE.” Smith writes: “So, for anyone who thinks that the FACE campaign is going to fade into the fiscal crisis sunset—they are dead wrong. We need a vigorous campaign now more than ever.” He also wrote, “[W]e need to continue to put forward legislation to address these issues as a vehicle for educating legislators, whether this is a full FACE bill or alternatives. The “alternatives” to the FACE prototype legislation provide some very interesting reading for part-timers. Here’s what AFT national leaders are suggesting to their state and local leaders: “The definition of pay equity for contingent instructors could be altered to reflect your perspective of what is feasible and the best definition of equity in your particular circumstances. (The full FACE bill leaves the definition of equity up to the institution.)”

Translation: FACE provides a license for union local leaders, and college administrators to negotiate pay equity for part-time faculty at 50 percent of what a full-timer earns and call it “equity.” It happened to those 1,400 part-timers in California. There are those reading this who will think that equity set at 50 percent is better than earning 40 percent of what a full-timer takes home for teaching the same course. Except that it’s not, really. It’s the twisted idea of some well fed, well paid, well pensioned unionist in Washington, DC that 50 percent is better than 40 percent. Getting paid half of what someone else does to do the exact same work is criminal any way you slice it. Having your union leaders suggest pay equity is a gain is an insult to the intelligence of those part-timers whom they “represent.”

That’s why FACE is all wrong for part-timers. The legislation has, all along, pushed pay equity over pay parity for the part-timers represented by union.

“Hell’s bells!” you say. “Why in the name of Albert Shanker aren’t the AFT’s higher education leaders pushing pay parity for part-time members?” As we are all fond of saying, “That’s an excellent question! Anyone? Anyone care to venture a guess?”

Here’s my guess: There are people in power within the education unions on both the national and state levels who believe firmly that part-time faculty are a danger to higher education and, as a result, ought to earn less than full-time, tenure-line faculty. In short, there are people within the union who want to, as Scrooge suggested, “reduce the surplus population” of part-timers. It’s that simple, because if AFT officials in Washington and at the state levels truly believed in parity, the term papers would really hit the fan, and maybe, just maybe, the 60,000 of part-time faculty represented by AFT would have a snowball’s chance in hell of earning equal pay for equal work.

The sad truth is that FACE, the precedents it sets, the testimony given by unionists (and part-time faculty) in favor of it, make it increasingly difficult for part-time faculty everywhere to argue in favor of pay parity for themselves. FACE supporters, after all, proudly testify to state legislators and the press that pay equity will do splendidly for part-timers, thanks very much.

Thanks, but no thanks. I want equal pay for equal work. Doesn’t everyone?