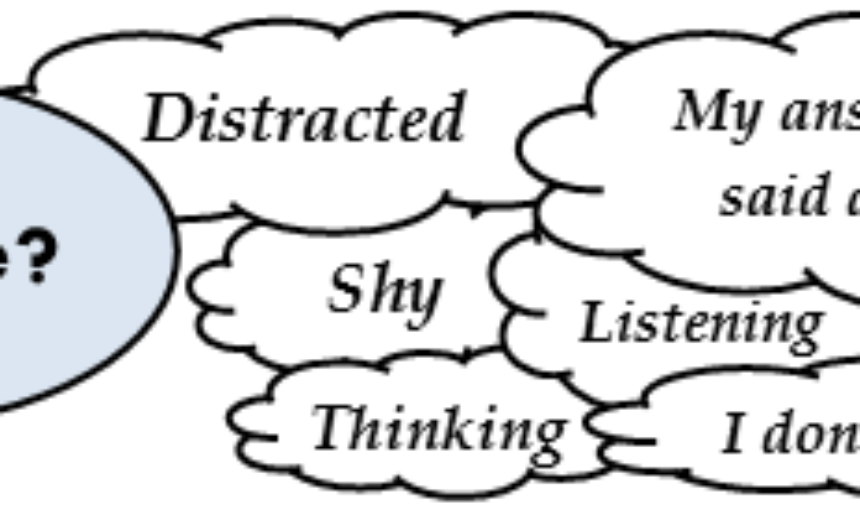 by Paul T. Corrigan
One balmy spring afternoon, I asked my students, “What is the difference between being a student and being a learner?” I hoped to start a lively discussion about the purposes of college. Instead, one or two students attempted an answer, while the others sat quietly in their seats, avoiding eye contact with me. The room filled with awkward silence: 5 seconds, 10 seconds, 20 seconds . . .
Whether I consciously think it or not, I often perceive this sort of silence as a sign that students are disinterested or disengaged (or even hostile). I imagine other teachers feel the same from time to time. Thankfully, we know that silence from students is no reason to panic. When a question falls flat, we have plenty of options,* including

On this particular day, however, instead of simply ending the silence, I wanted to understand it. What does silence from students actually mean on any given occasion? To find out, I asked my students: “Pull out something to write with and something to write on. Tell me, why didn’t you answer the question I just asked? I’m curious.”**
I collected the responses and shuffled through them immediately. No one said they didn’t care. No one said they were bored. No one said they disliked me or the class or the question I had asked. Several said they didn’t speak up because they didn’t know the answer. Several confessed they were shy.*** One wasn’t paying attention. One considered listening wiser than speaking. And so forth. (Click here to see the actual responses [PDF].)

When I asked students why they didn’t answer, my perception of the silence shifted.

These responses gave me practical information to use moving forward. Some of the responses suggested that it might be helpful to guide the students more in how to participate in discussion. To those who didn’t know the answer, I might say, “That’s okay. There’s not one correct answer. Just think about it and give a guess.” To the one who was watching a video, I might say, “Consider how that hurts your (and your neighbor’s) learning.” And so on.
More importantly, hearing directly from students about why they didn’t answer shifted my own perception. The silence was neither homogeneous nor negative, as it may have initially felt. The students gave varied and (for the most part) reasonable reasons for why they didn’t speak up. A small epiphany. By simply pausing to ask, I came to better understand both the silence and the students.
NOTES
*Among many resources available on teaching with questions, several that appear particularly useful and grounded in scholarship include William E. Cashin’s IDEA Paper (no. 31), Kenneth E. Vogler’s “Asking Good Questions,” The Teaching Center at Washington University in St. Louis’s “Asking Questions to Improve Learning,” and William F. McComas and Linda Abraham’s “Asking More Effective Questions.”
**This tactic, an ad hoc student survey, borrows from “muddiest point,” “minute paper,” and other classroom assessment techniques popularized by Thomas A. Angelo and K. Patricia Cross. This sort of activity shows how easy it can be to pause for a moment to gather information from students about any teaching situation. It is also informed by John Bean’s recommendation in Engaging Ideas: “When students run out of things to say . . . suspend the discussion and ask for several minutes of writing” (p 132). I thought that my new, meta question would not only give me information but also get students thinking for themselves about why they didn’t answer the question, which may prompt them to respond more readily to questions in the future (though I made sure to ask in an inquisitive rather than accusatory tone).
***Susan Cain and others have recently brought greater attention to the challenges introverts face and the contributions they can make.