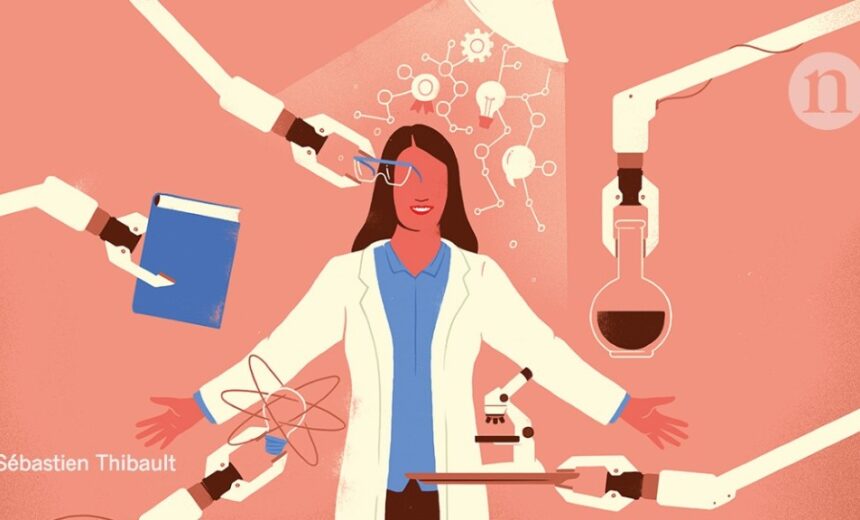 The Black Lives Matter movement and the pandemic reveal a need for more inclusive science education.

Picture yourself in an introductory college chemistry class. What does the instructor look like, and how is the class taught?

Whether the curriculum is virtual or in person, often the instructor is a white, cisgender man, lecturing to a large class of perhaps 100 or more students.

In the textbook, you likely see equations, diagrams, figures of chemical structures or reactions. Most likely the photographs dotting the pages — as well as the attributions for the laws, equations and reactions — belong to white men.

For a student who does not fit that scientist stereotype, an introductory college science class can be a disappointing reality check. When instructors and textbooks alike show the same images that have been ingrained by society, many students receive the message that they do not belong. This initial impression is crucial, because at this point students are assessing the viability of their career choices and forging their adult identities.

The overwhelming majority of names and images in textbooks belonged to cisgender men in a classic 1991 analysis of high school chemistry textbooks for gender representation. Nearly 30 years later, a meta-analysis of 78 studies showed the majority of student drawings of scientists still depicting white men. In 2010, a study showed that female students had higher comprehension of chemistry after viewing images of female scientists than they did after looking at stereotypical images of male scientists.

Chemistry courses are the gateway to the premedical track. A lack of racial representation in medicine and STEM fields has led to what can only be defined as a public health crisis, at a time when the coronavirus shows we desperately need more health care workers.

There has been some progress. Between 1998 and 2014, the percentage of freshmen intending to major in science increased among most ethnic and racial demographics and also among women, according to a study by the National Science Foundation. However, there were also increases among white males, which maintained their disproportionate representation.

As a female assistant professor of chemistry at Northwestern University in Evanston, Illinois, I’ve taught nearly 2,500 students over four years. There have been efforts to improve student diversity, but the approach to the material remains largely unchanged, and women and Black and Latino students still lag behind. Many students who are first in their family to attend college have told me the pace and climate in this competitive science class are just not for them.

And here’s why that matters: With the fall semester underway either in person, virtually or both, students are making decisions on whether or not to stay in the course. The course’s atmosphere and demographics play a large role in these decisions.

That’s why administrators who are deciding on faculty course assignments for next year, and possibly hiring, must consider diverse and representative faculty candidates, so that the vicious cycle of poor representation does not continue to discourage female-identifying, Black and Latino students from pursuing careers in STEM fields (science, technology, engineering and math).

The history of scientific exploration is plagued by the explicit biases of those who perform research in their institutions and therefore hold power. During the early years of exploration, women and people of color were largely excluded from participation.  They did not have opportunities to have a thermodynamic equation named after them, like Josiah Gibbs or Rudolf Clausius.

Simply trying to include more women, Black, Latino and indigenous people of color on faculty is not enough.  We must adjust the way science is presented in the classroom — as more than just a set of laws and equations to commit to memory, as a human process of discovery through trial and error.

Even Emmy Noether, described by Albert Einstein as “the most significant creative mathematical genius thus far produced since the higher education of women began,” was forced for years to lecture without pay under a male colleague’s name. Imagine how many similar stories are untold.

Patriarchy and white supremacy have historically prevented the participation of women and people of color in major academies of science. The Royal Society of London, founded in 1660, failed to elect any women to full membership until 1945. As of 2018, membership was still only 9 percent female.

Scientists may want to believe that science is objective and can therefore be divorced from the influence of bigotry and bias. History proves otherwise. Simply trying to include more women, Black, Latino and indigenous people of color on faculty is not enough. We must adjust the way science is presented in the classroom as more than just a set of laws and equations to commit to memory, as a human process of discovery through trial and error.

To capture this essence, science classes need to go beyond what is widely considered science content. The contributions of Nobel Prize winner Fritz Haber to agricultural process chemistry (said to be responsible for a global population increase of 5 billion people in the last century) are no less educational when one also includes the story of his wife, Clara Immerwahr, a Ph.D. chemist who protested his development of inhumane forms of chemical warfare and eventually took her own life.

There is not a single right way to frame the introduction to any science discipline, and it is worth exploring how different approaches may serve different students. The familiar delivery of science — top down from a patriarchal hierarchy of known voices — may feel comfortable, but this cycle of underrepresentation needs to be addressed through significant change.

Through authenticity and transparency, instructors can call out the narrow representation in the field —  and celebrate milestones, such as the recent Nobel prize in chemistry, which went to two women. By presenting this observation as a problem to be solved, faculty can help underrepresented students  begin to understand why their participation is so important.

A push for greater diversity in academia and scientific research has followed the Black Lives movement, and it’s about time. Black researchers in STEM fields report high frequency of racial or ethnic discrimination; some 62 percent reported experiencing incidents, while 57 percent said their workplaces did not address these issues sufficiently, according to a 2018 study by the Pew Research Center.

More recently, scientific faculty and students have joined an international movement in solidarity with

Black Lives Matter, demanding conversations around racism at research institutions. It matters that the default stereotype of a scientist is a nerdy, straight white guy. Only after the power of that single image is removed will students who have felt left out understand why they must continue in STEM fields, where they are urgently needed.

Otherwise we have failed.