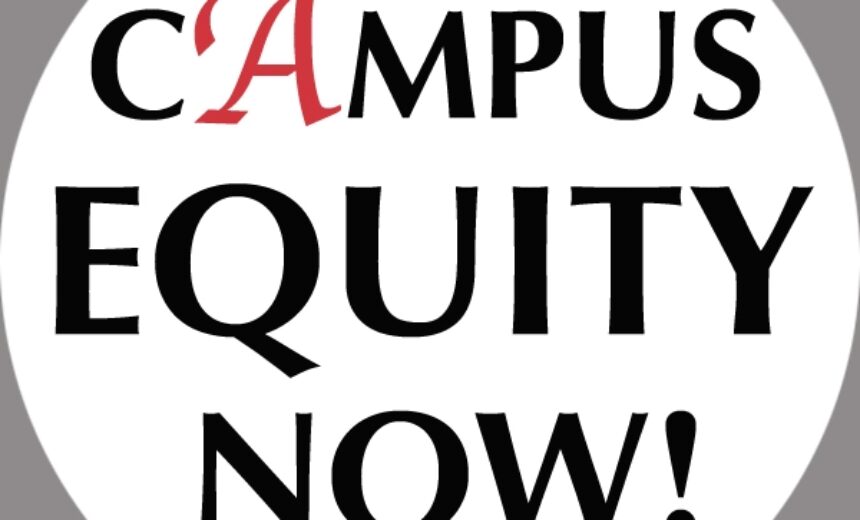 The issues of contingent academic employment in higher education are, we believe, universal. They threaten the foundation of human intellectual development and socio-political progress worldwide.

CEW/FEW has its roots in a coalition established for a common week of action throughout California’s 107 community college campuses (CCCs) in Spring 2000 (Called Action 2000 or “A2K”). The motivation then was a common interest in specific state legislation and the California state budget. There developed active participation on 85 campuses which gained strong support in the legislature and from California’s Governor. However, many long term benefits of the week of action were not really goals (though some of us hoped for and predicted these outcomes).

1st, we found that local campus groups used the week to focus on current local issues in addition to the state-wide themes. As a result, they increased the involvement of contingent and tenured faculty in their local faculty organizations.

2ndly, we found that the core group of statewide faculty organizers was greatly expanded, and that new organizations on campuses that had no history of activism developed. Several moribund union locals were invigorated. Successful union organizing campaigns were initiated at other colleges. California community college faculty continues to make strong gains at both the state and local levels. Average salary gains statewide for contingent faculty were over 13% in the 2 years following the Action 2000 campaign. Contingent faculty also gained health benefits and some due-process rights at many colleges.

3rdly, the California campaign came to the attention of a nascent coalition of faculty on the East Coast of the US (the Conference on Contingent Academic Labor (COCAL – later becoming the Coalition of Contingent Academic Labor), leading to the establishment of ties among several centers of faculty organizing that were confronting the increasing abuse of contingent assignments in higher education. Fueled by internet listservs and email communications, various faculty leaders throughout North America agreed that the A2K model of loosely coordinated but locally motivated and controlled action was worth attempting throughout US and Canadian higher education. At the COCAL IV Conference, Jan. 2001, San Jose, CA, a decision was taken to coordinate CEW 2001 across North America. CEW coordination was financed by support from 24 national, state and local faculty organizations (unions and professional associations). During the week of Oct. 28th to Nov. 3rd, actions took place at many of the original CCCs, as well as at colleges and Universities in 6 Canadian Provinces and over 30 of the 50 United States. Most of the faculty involved in local organizing of CEW activities were making their first contacts with the growing North American coalition, and about 10% were making their first forays into faculty activism on their campus.

4thly, since CEW 2001, Chicago-COCAL was formed as a strong regional coalition, COCAL V drew well over 200 participants to the Conference in Montreal, Canada, Oct. 4-6, 2002, and COCAL-California has been formed as a regional coalition among contingent academic labor throughout California’s system of public higher education (The University of California, California State University, and California Community College systems). CEW/FEW was held Oct. 27-31, 2003 (and also in the Fall of 2002 and 2004 without central coordination).

The benefits of coordinated activity lie particularly in the increased visibility of local action through its connection to the greater whole. This has strong motivating force in drawing new faculty activists into the movement, helps provide training through information sharing and community building, increases press and public interest, teaches local administrators that their actions will no longer remain invisible but will become the object of public discussion throughout higher education, and strengthens our arguments through an extended common voice. We have been able to shift the focus from narrow labor issues to broader questions of institutional integrity and educational quality through the simple recognition that: 1. “Faculty Employment Conditions are Student Learning Conditions” and 2. “Equitable Educational Experiences for Students Require Equitable Institutional Support of All Faculty.” Also, such broadly connected activities create a strong incentive for state and local politicians to become visibly involved with the issues.

CEW 2005 will continue these efforts. The threat to quality higher education and academic freedom created by the growth of for-profit colleges, the corporatization of private and public non-profit colleges and universities, and the corresponding increased use and abuse of contingent academic labor (now over 50% of faculty positions in the United States), continues to be a growing a world-wide problem. We strengthen each other by joining our voices.

Campus Equity Week 2013 is just three weeks away. On the surface, it is an impressive national push to draw attention to the plight of the nation’s non-tenured faculty. In truth, the irony of the National Education Association, American Federation of Teachers, the California Federation of Teachers and the United University Professions (UUP) sponsoring Campus “Equity” Week should not be overlooked. All of these institutions have worked against pay parity for adjunct faculty. The CFT sponsored Senate Bill 114. That was a wild ride meant to institutionalize unequal pay for tens of thousands of non-tenured faculty in California. On the East Coast, UUP faculty union leaders have bargained contracts that give full-time and part-time faculty union members “equal percentage” raises. That means the union member earning $100,000 and the union member earning $20,000 get the “same” 3 percent raise. It’s an abomination that has directly contributed to the widening pay gap between full-time and part-time faculty in higher education.

The recent death of a long-time Duquesne University adjunct faculty member has spawned vitriol and numerous demands for equal pay for equal work within higher education.

Alas, equity is not equal pay for equal work. Pay parity is equal pay for equal work. Campus Equity Week is, then, on some level, a cruel joke played on the non-tenured faculty who, under the auspices of the program, want, need and speak out for pay parity. The union sponsors mentioned above have, for the past decade, actively undermined this concept and backed pay equity. In other words, the work of an adjunct is worth, say, 60 percent of what is paid to a tenure-line or tenured faculty for the same work. A decade ago, the California Federation of Teachers took millions of dollars of “equity pay” earmarked by the state legislature to increase the pay of the state’s part-time faculty and funneled it to full-time faculty on overload. How’d they do that? By changing their union contracts to classify full-time faculty working overload as “adjuncts.”

Campus Equity Week is a straw man offered to people looking for hope. As I’ve said for the past decade, I’m waiting for the AFT, NEA and other education unions and their allies to launch Campus Pay Parity Week. That would really be something, because for starters, it would show adjunct faculty exactly who their friends really are.