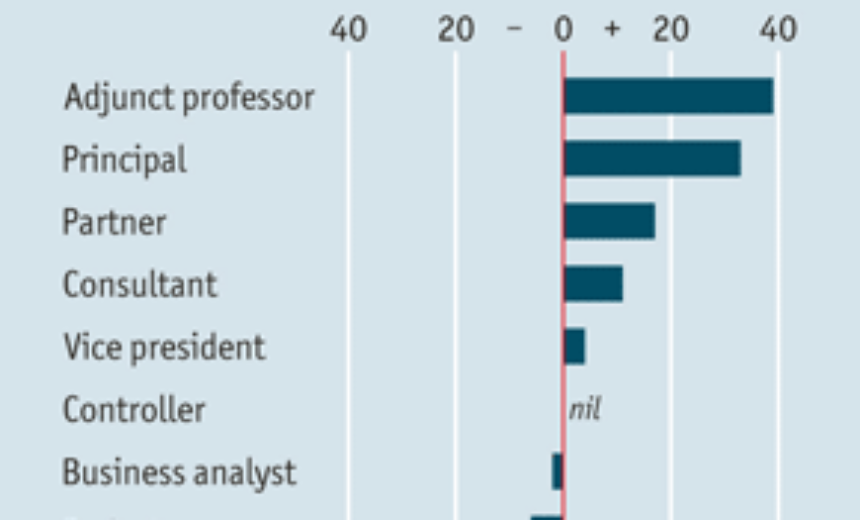 LinkedIn, however, says it knows that, and much else gleaned from the profiles of its millions of members. The social-media website for professionals can tell you that one of the fastest-growing job titles in America is “adjunct professor” (an ill-paid, overworked species of academic). One of the fastest-shrinking is “sales associate” (see chart, below).

Researchers already mine the internet for hints about disease outbreaks, the national mood or inflation. LinkedIn thinks its data can do the same for the job market. It has more than 150m members worldwide, 60m of them in America. That should be enough to draw accurate inferences about the entire American labour force.

At the request of the White House Council of Economic Advisers, it calculated which industries and job titles were experiencing the biggest gains and losses. Scott Nicholson, a “data scientist” for the firm, says LinkedIn can potentially track such changes in real time, rather than the weeks or months government surveys take. It can also follow occupations and industries, such as e-learning, that don’t have their own category in government tallies. It can trace shifts between regions, sectors and occupations. Are people quitting law firms to become law professors, moving from Arizona to North Dakota, or what?

The firm hopes to be able to track the nation’s evolving skills base. Members routinely pick up new skills and add them to their profile. LinkedIn can see how often job-changers mention a particular skill, such as Hadoop. Jeff Weiner, the firm’s boss, imagines that eventually every job opening and its requisite skills will be digitally searchable by every potential candidate, reducing the friction that lets millions of vacancies co-exist with high unemployment.

Such granularity could revolutionise economic research, says Erik Brynjolfsson of MIT. But for consistency and longevity, you can’t beat the government. As Mr Brynjolfsson notes, “Web companies don’t tend to have the same lifespan as the US Census Bureau.”