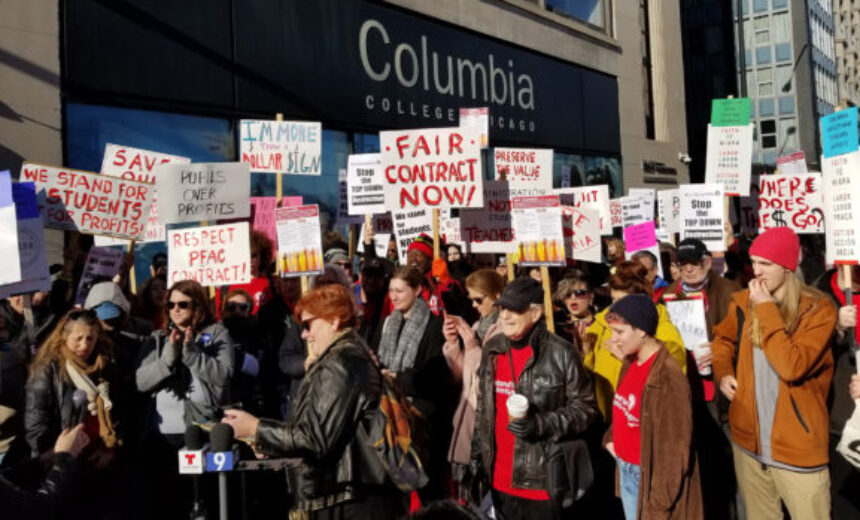 The part-time faculty union election underway at Columbia College Chicago looks more like a Windy City whodunnit than anything else, and it’s a whodunnit being investigated by the U.S. Department of Labor. The part-time faculty members of the CFAC union are poised vote on whether to toss out their long-term union president and her slate in favor of candidates who say they will reshape the union as a more transparent and democratic organization.

The Reform CFAC slate of candidates advertise themselves as “rank and file members committed to making our Union more democratic, more accountable, and more transparent.” The CFAC Standing United slate (the incumbents) say they are the “experienced and proven team,” with a “record of advancing diversity” and “establishing alliances supporting CFAC actions.”

The four faculty members challenging the current union leadership for control of the CFAC want to know why the union’s dues were hiked from a flat rate of $130 per year to 2.5 percent of a member’s total pay (as much as $412 per year for adjuncts teaching three courses at the top of the pay scale [$5,600 per course]). The challengers claim members have been told little to nothing about the union’s liabilities—which financial disclosures show are substantial. The challengers allege that their own union’s leadership is secretive, and lacks transparency. Then there’s the question of why union leaders neglected to hold elections for the past four years. That prompted the U.S. Department of Labor to investigate, step in to supervise the present union election.

This election scandal comes on the heels of the union’s “Integrity Committee” incident.

On October 23, 2018 CFAC member and former part-time administrative employee Gita Kapila sent an email to the entire membership with this subject line: “Full disclosure: the union is broke.”

“I am writing to inform you that the union is in debt,” Kapila wrote, providing a link to a public document filed with the federal Department of Labor that summarized the union’s finances. According to the document, at the end of the 2018 fiscal year on June 30 CFAC had negative net assets of $23,509.

In response to Kapila’s release of the union’s own publicly-available financial record, union bargaining team member (now Treasurer) Susan Van Veen wrote that, “it is a gross misrepresentation of fact to even suggest that the CFAC Union is broke.”

According to a piece published by the Chicago Reader: “Kapila, who also teaches in the film department, says she was fired after pressing Vallera for invoices required to back up the figures that were reported to the DOL. The union empaneled what it called the Integrity Committee. That committee initially issued charges made by anonymous accusers that Kapila had used membership and financial information ‘without permission’ to attack the union and ‘make false personal attacks on the union president.’ On November 12, she was sent an expanded list of charges. She was accused of ‘creating a hostile member faction,’ and her accuser called for an investigation of whether she overpaid herself.”

Derek Fawcett teaches in the Music Department and is running to serve as CFAC president. Fawcett has said the first thing he will do if he is elected president of the Columbia part-time faculty union in December “is release the union’s financial books to demonstrate how much debt the union is in, how member dues are being spent and how much officers have been compensated.” Fawcett has told the media that he knows more about the finances of his own condo association than he does about his own union’s finances.

Jason Betke is running for the position of vice president as a member of the Reform CFAC slate. He has told the media: “The heart of the problem is that leadership doesn’t tell us much. We’re left to speculate.”

The U.S. Department of Labor requires unions to file detailed financial disclosures annually. These disclosures (LM-3 forms) include union officer compensation, union revenue, union expenses and a variety of other detailed information. The DOL’s database may be accessed and searched here: https://olms.dol-esa.gov/query/getOrgQry.do . AdjunctNation used a decade of the union’s financial disclosures filed with the U.S. Department of Labor to look more closely into issues about which candidate Jason Burke alleges CFAC members are forced to speculate.

Diana Vallera has been the President of CFAC since 2010. The group represents 679 part-time faculty members, according to its September 2019 LM-3. The CFAC bylaws require members to elect officers every two years. Members allege no proper election has been held for the past two election cycles (since 2015). They complained to the U.S. Department of Labor, which launched an investigation. That investigation turned up serious problems.

The union’s constitution called for the election of four top officials to a steering committee, but not to any particular office. Once elected, the officials would decide among themselves who’d serve as president, vice president, treasurer, and secretary. Under this arrangement, Diana Vallera—who came into power charging that previous leadership hadn’t been aggressive enough in pursuing members’ interests—has been CFAC president since 2010. But this setup, the DOL concluded, is a violation of federal labor law: union members must elect officers into specific positions. And the vote needs to be taken by secret ballot. To ensure security, it needs to be a paper ballot submitted through the U.S. Postal Service.

On the union’s 2017 disclosure (left) signed by Vallera and submitted to the U.S. Department of Labor, there is a question that asks when the next union election is scheduled to be held. In the disclosure signed in June 2017, Vallera told the U.S. Department of Labor that the CFAC’s next scheduled union election was November of 2017. Likewise, when she signed the union’s 2015 disclosure filed with the DOL, that disclosure states that the next regular election of union officer’s would be held in “November of 2015.” Neither election was ever held.

Vallera’s sales pitch to her membership as to why they should vote to keep she and her slate in office is this: “The administration would love to get this [opposition] slate in. Why? Because they have no experience.”

Financial disclosures filed with the U.S. Department of Labor over the course of the time Vallera has led the union provide, perhaps, the most detailed explanation about why the union’s members may have been “left to speculate” about the union’s finances and inner workings. Between when Vallera was elected to lead the CFAC and 2019, her leadership has resulted in a membership drop of 36 percent, and a drop in union revenue of over 40 percent from its high in 2014.

Over the course of her years at the helm of the union, Diana Vallera’s organization has bled money and members, and is now faced with liabilities almost equal to the organization’s annual revenue.

In 2010, Vallera took over the leadership of a union with 1,019 members, $127,064 in assets and $221,367 in revenue. In 2019, the union declared to the U.S. Department of Labor that it represents 679 members. During eight of her last nine years at the helm, Vallera’s union has spent more than it brought in and run up debt almost equal to its annual revenue.

Another issue that the reform slate members have brought up is the officer compensation paid to the union’s leadership. If elected president of the CFAC, Derek Fawcett intends to put the question of officer compensation up to a vote of the membership. Diana Vallera has said her salary has never been a secret. Vallera recently told the Columbia Chronicle (the college’s student newspaper) she has “never heard complaints from members on this topic and that she has never hidden her salary.”

Nonetheless, despite steep declines in revenue and membership, in 2018 Diana Vallera paid herself $52,753 in compensation, or one-third of the $158,864 in total revenue brought in from member dues that year. During the nine years she has led the union, Diana Vallera has paid herself over $200,000 in compensation, an amount which she says does not compare with what other union leaders are paid. Over the same time period, LM-3 records show that other officers of the union saw their compensation drop to nothing.

“My salary … that’s always been transparent, what I’ve made and what I’ve been able to accomplish. Compared to what labor leaders make, or certainly what I’ve been offered to make, it is significantly less. Why? Because I love the work. … The old way of thinking was that you’d work only five hours a week as union president. If I worked five hours a week we wouldn’t have the union we have today,” said Vallera.

Under Vallera’s leadership, compensation of officers, mainly the president, skyrocketed. In 2009, the union reported revenue of $203,403 and the LM-3 disclosure form filed that year shows total officer compensation was $4,212, with the union’s president and secretary receiving no compensation.

Union Dues Went Up, Why?

Since 2010, the part-time faculty union members at Columbia College Chicago have paid a total of $2.1 million in union dues to an organization led by Diana Vallera, an average of $2,500 per union member.

The faculty members who are challenging the incumbents obviously have little understanding of the long-term, serious financial problems that face their union. Thus, they want to know why the present union leaders raised dues from $130 per year to 2.5 percent of a member’s gross income. The challengers allege that the hike in dues was not adequately explained or discussed. However, it’s not difficult to piece together an explanation by examining the union’s own LM-3 disclosures. Over the past decade, the CFAC’s revenue has plummeted, total assets have fallen, and the union has run up liabilities equalling $103,629.

Reform candidate Betke says this change in dues means that “anyone teaching more than one three-credit course per semester will be paying more than they did”—possibly two or three times more. Doubling, tripling or even quadrupling dues paid by the present 679 members would, obviously, increase the union’s revenue significantly.

However, the bulk of that additional revenue would mean squeezing those who can least afford to give more. The money would be collected from adjunct faculty earning poverty-level compensation, on average $18,400 per year when teaching four courses.

To be paid at the top of the union’s present compensation scale bargained in the latest contract ($5,600 per course), an adjunct faculty member has to have taught 140 credit hours or more. According to the union’s contract, adjuncts with 51 or more credits (accrued at the rate of 3-6 credits per term) may be offered two courses per semester. This means to reach 140 credit hours taught, and the top of the union’s pay scale, an adjunct would have to teach for 12 years at the college.

Ballots were sent to CFAC members November 18; the vote, under the supervision of the DOL, will be closed and tallied December 9.

Diana Vallera says, the opposition candidates have “opposed progress” at every step. To her, experience trumps the desire to make the union more transparent.

“One of the things this union should be advocating for is making it easier for us to go all in on Columbia,” challenger Derek Fawcett said. “This notion that, ‘Oh yeah, we all need to teach at three different schools, that’s just kind of the nature of the beast,’ is kind of garbage. It’s the reality that we’re living in, but it’s kind of terrible. It strikes me that an organized, thoughtful, professional union like this could zero in on a few things that we can do to make it that much easier … to invest further in our work here.”