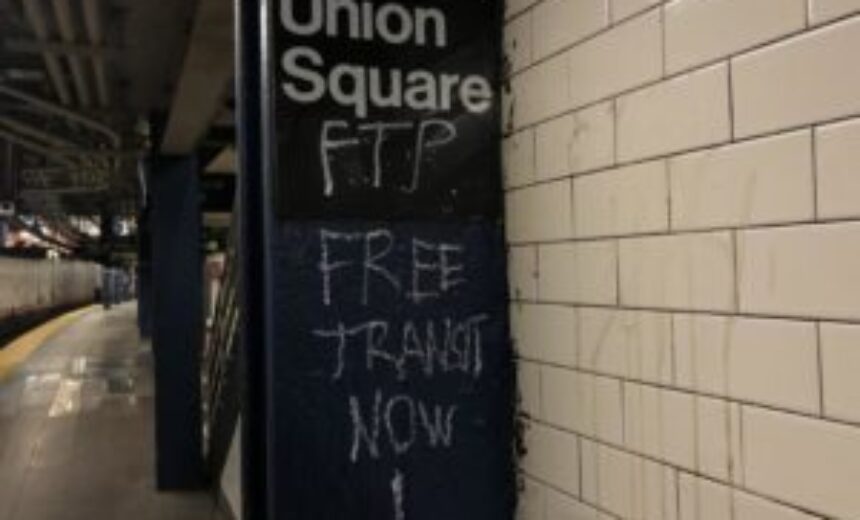 An NYU adjunct professor is allegedly the organizer of the protests in the subways that caused $100,000 worth of damage in the last few months.

Gallatin Adjunct Professor Amin Husain is the lead organizer of Decolonize This Place (DTP), the New York Post reports. DTP is an activist and artist collective which supports a range of movements including Free Palestine, Indigenous resurgence, de-gentrification and black liberation, among other causes, according to their website. They coordinated the ‘F-ck the Police’ Action protests, which have happened in the past few months.

The most recent protest, taking place at the end of January, came weeks after New York Governor Andrew Cuomo announced a plan to introduce 500 new police officers in the subways to crackdown on turnstile hopping, despite incidents of police brutality in subway arrests

“The chronic failures of MTA service are not the outcome of fare evasion, they are the result of abject failures of governance and botched accountability to the public who depend on mass transit in this city,” the Decolonize This Place website reads. “The FTP actions are helping to highlight these deficiencies. We are not fooled by the smokescreen.”

Professor Husain holds degrees from three universities, including a Master of Laws from Columbia University. At NYU, he teaches a course called  “Art, Activism & Beyond,” a workshop style class which looks at activist movements like #MeToo, Occupy Wall Street, Black Lives Matter and No Dakota Access Pipeline. His contact information was temporarily removed from the NYU website and he did not respond to request for comment at the time of publication.

On Jan. 31, FTP protesters took to the subways spray painting ‘F-ck the Police’ on subway cars and on station walls, jamming turnstyles and causing significant delays. Senior Politics major and Political Director of NYU College Democrats Arman Becan said that while their cause is justifiable, the aggressive tactics and rhetoric of this group can prevent a broad base of Democrats from participating.

“As Democrats, we support expanding public transportation, expanding access,” Becan said. “We do take issue with the MTA putting a lot of funding towards police officers versus using that money for other things. But, we denounce their actions, their tactics of achieving this.”

The FTP movement maintains that funding gaps for the MTA are caused by financial mismanagement and corruption, according to their site. The group sees policing fare evaders as an ineffective way to address the MTA’s debt, which also disproportionately affects people of color.

Both President of College Republicans Kristen Gourrier and Vice President of College Republicans Bobby Miller appeared in a Fox News interview to comment on Professor Husain’s actions. While Miller called for the professor to be fired, Gourrier said Husain should have never been hired in the first place. Gourrier also denounced the protest’s tactics and the view that opposition to the protests was a political push from the right.

Becan, speaking for NYU College Democrats, emphasized the thinking that peaceful tactics are the way to create the most inclusive protest.

“We see in this era of polarization we’re a little bit concerned about the rhetoric used specifically on the right, but now we know a little bit also on the left as well,” Becan said. “We as Democrats are a little more concerned that movements can be counterproductive to the overall Democrat and the overall liberal goal.”

In an email to WSN, NYU spokesperson John Beckman said the university is not aware of any criminal charges brought against Professor Husain.

“NYU opposes the views that have been reported: the University abhors violence, rejects calls for violence, has longstanding ties to Israel — including a campus there — and is opposed to acts of vandalism on the public transit system, which is needed and shared by all New Yorkers,” Beckman wrote. “It is, however, the case that among the thousands of part-time faculty we hire each year, some will disagree with NYU’s positions.”

This was originally published in the Washington Square News and is used here with permission.