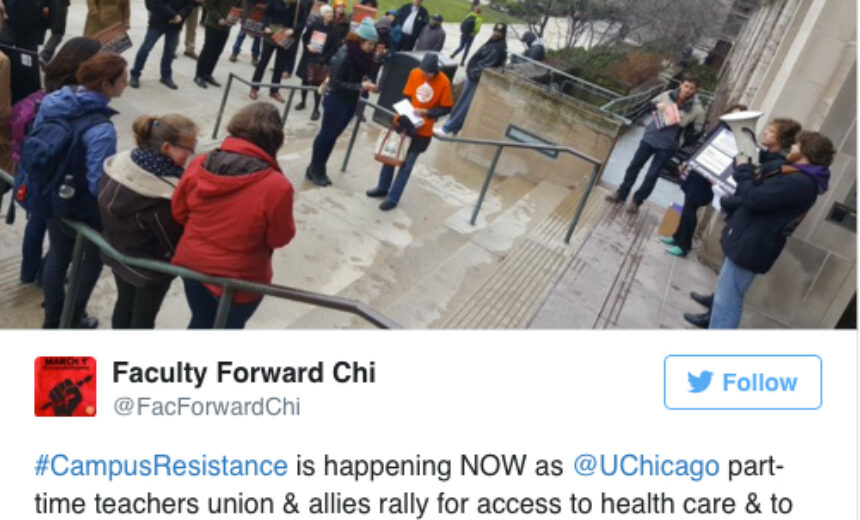 According to reporting on Chicagoist.com, groups demanding better treatment, pay and benefits for adjunct and part-time faculty in higher education held several demonstrations across the city Wednesday, including at Loyola University, the University of Chicago and University of Illinois at Chicago.

“We are everywhere. I want students to look up in their faculty listings and notice titles. Look at the number of classes being taught by non-tenure track professors at this university,” said Aaron Greicius, a professor at Loyola. “Let’s not forget we have a huge role here and all we’re asking for is compensation that’s commensurable with that very important role we take very seriously.”

A group of adjunct and nontenured professors at the school voted to unionize in January, according to a report from the Chicago Tribune. Adjunct professors at Loyola said that bargaining with the school has been slow and they want the campus to “live up to its social justice mission.”

The Chicago demonstrations, held under the banner of “campus resistance,” coincided with a series of protests that took place on college campuses in several cities across the country that also put focus on the Trump administration’s attitudes towards universities.

“Here at U Chicago, some of part-time teachers are underpaid to the point where we can’t afford much-needed health care,” read a statement from Faculty Forward, one of several groups that organized the demonstrations, on Facebook. “With the Affordable Care Act being threatened by the Trump Administration and the University not providing health insurance to part-timers, many of us are in danger of losing access to health insurance.”