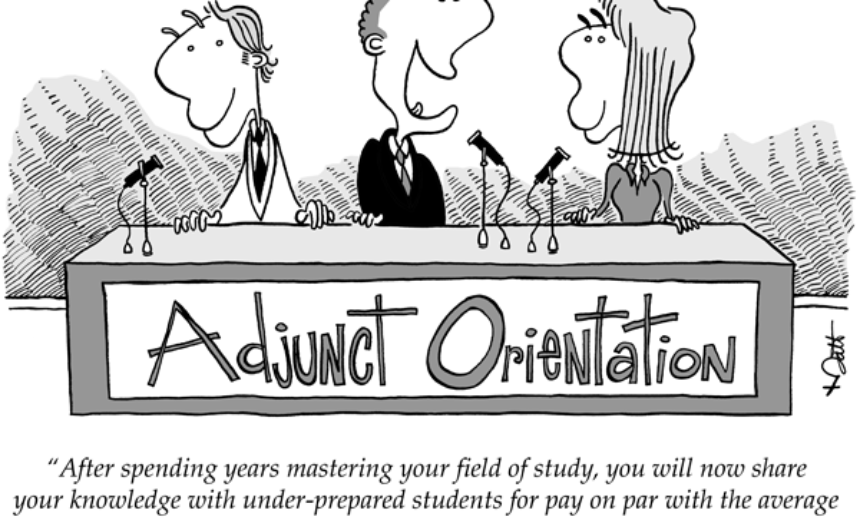 Satirist Teena Angst, has announced defeat in her attempt to generate satire pertaining to adjunct faculty. Angst explained, “I once met a gay, female, little person, African-American, amputee who was Jewish. I remember thinking that was the most oppressed person in the world. Now I know better. The most marginalized person in America is actually the faculty adjunct, which trumps all the disadvantages of a sextet minority.”

In chronicling her journey, Angst admited, “I feel adjuncts are an underappreciated satire reading audience, disgruntled and encouraging of any pieces that demonize their oppressors. There is no piece I would like to write more than one that taps into their misery and abuse.” Angst paused and concluded, “It was to be my magus opus.” Sadly, after three weeks of research, Angst found that she was incapable of writing about adjuncts because of editor demands that the piece “is satire and not just telling the truth.”

Angst found her magus opus stalled when the rules of good satire halted her in her tracks.

“I pitched an idea to the editor,” indicated Angst. “I was brainstorming about possibly comparing adjuncts to slaves or prostitutes and asked for permission.” Pulling up her editor’s e-mail Angst saw, “[CronkNews editor] Leah Wescott gave me the green light to be as edgy as possible, but added the caveat to write ‘waaaaaaaay over the top’ in order to overcome the harsh realities of part-time faculty.” Angst admitted that this one expectation proved too difficult to fulfill.

Pulling up her online research, Angst opened an indentured servant contract from 1669 and compared it side by side to an actual adjunct contract. Pointing at the items Angst indicates, “No satire here, the two items are an almost verbatim match. That’s reality.”

Googling the definition of “slavery” Angst pointed at, “a condition compared to that of a slave in respect of exhausting labor or restricted freedom.” Sighing, Angst draws up multiple blogs, posts and articles comparing adjuncts to slaves, even one imploring adjuncts to stop referring to themselves as slaves. “I can’t draw a comparison to adjuncts as slaves, especially when they already see themselves that way!” Pulling up another article, Angst points at a University President who refuses to acknowledge a reprimand by the AAUP using the argument that adjuncts have no rights under the AAUP. “Holy crap!” explained Angst. “It’s like Dred Scott v. Sandford, but at least the public followed the Dred Scott case and had moral objections to the system at the time.”

In an almost ironic twist of satire, Angst argued that her research indicated that the “correct” unjust economic system adjuncts should compare themselves to is that of the crop-lien system. “It’s like a slave being set free with a Ph.D and going back to their masters. Except now the masters no longer have to feed them through assistantships and student loans, but still expect the adjunct to tend the metaphorical field. Hell, maybe I’ll write a real piece on that at some point.”

Pointing to another adjunct blog, Angst asked, “Do you know how most people end up being subjected to human trafficking? A promise of opportunity elsewhere!” Angst points at the blog that discusses how many PhD, MFA and MA programs lured adjuncts into advanced degrees with heavy marketing and promises of jobs that did not exist in their market areas. “Before you know it, some adjunct is in Iowa and can’t afford a ticket home, has to work at six community colleges and a Taco Bell to pay rent! Wait, wait,” Angst stopped and pulled up another article. “My bad, it’s either six community colleges that are non-affiliated and a Taco Bell or one community college for fewer hours, a Taco Bell, Wet Seal and a Barnes & Noble coffee shop. Colleges have to scrutinize adjunct hours for health care laws now.”

“There’s so much suffering here, no over the top comparisons actually exist for this population” said Angst pointing to the screen, “I want to be their Sarah McLachlan. Hopefully they will click this link while humming ‘Angel.’”