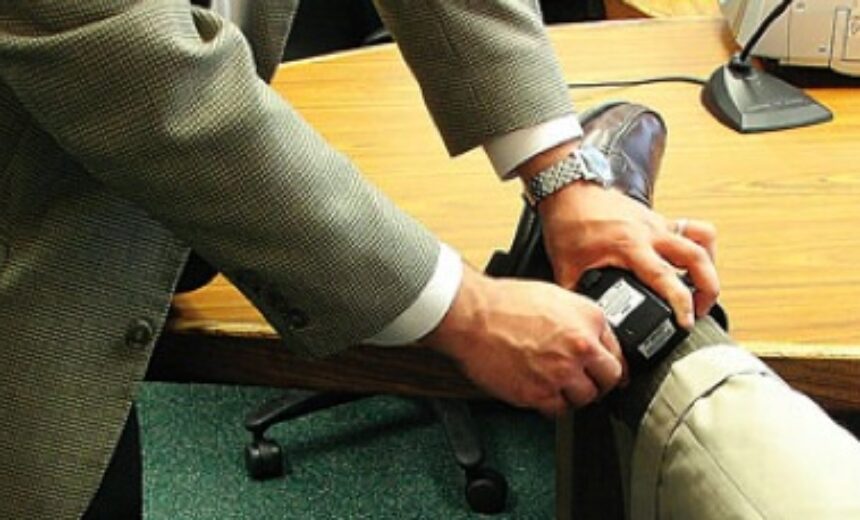 by Monty Tufnel and Leah Wescott

“Professor Regins used to be really cool. I looked forward to his lively class discussions,” said one student. “Now he just stares at his feet and lectures from old PowerPoint slides. Our Provosts calls that a ‘best practice.’”

In an effort to meet the demands of the Affordable Care Act, affectionately known as Obamacare, Smothers University announced today that it will require adjunct faculty to use electrified ankle bracelets to keep their hours under 30 hours a week. The Affordable Care Act requires businesses, including institutions of higher education, to provide health benefits to all full-time employees, who are defined by working 30 hours a week or less.

For colleges and universities who rely so heavily on part-time faculty, this could add several million dollars to the institution’s budget. While some, such as Youngstown State and Community College of Allegheny County, in Pennsylvania, have responded by immediately reducing and capping adjunct loads, Smothers University has taken a radically different tactic.

“Going to a ankle tracers has been a recommendation for tracking all faculty workloads for quite awhile now,” said Smothers Provost Lyle Hedgerow. “With Obamacare going into effect, we figured this was the opportunity to use anklets to help track, and thus control, our adjunct workloads.”

According to the Smothers press release, adjuncts will actually clock in before teaching a class, clock out when done teaching a course, use an electronic pin number to access the time clock from home so that they can record the time actually spent grading or prepping for class, as well as punch in and punch out for department meetings.

“Whether we like it or not, many instructors don’t keep their classes for the whole time,” said Hedgerow. “They might take a break to go to the bathroom without letting their department chairs know, or blow off our faculty meetings. In classes that involve a lot of discussion, we have adjuncts who don’t even teach for full minutes at a time. Why should Smothers have to pay health benefits to this ‘full-timer’ who really is only working 26 hours a week? Our trackers will record every second of an adjunct’s experience, just like the black box on an airplane.”

Smothers promises to release any adjunct caught padding hours. Around the Smothers campus, anonymous writers to the college newspaper have labeled this action as a misguided response to “Obamascare.”

“We’re convinced that when the full calendar year is complete, we can show that none of our adjunct faculty ever achieved this mythical full-time status of 30 hours a week for every week of the year,” said Smothers Director of Public Relations Clive Sallow. “If executed properly, we could even increase adjuncts’ visibility on campus while reducing our teaching expenditures by up to 50 percent.”

“I put in over 50 hours on campus last week but really only worked about 23, according to my anklet,” said one instructor. “I’ve eliminated class discussions and I don’t call on students with raised hands anymore. The Provost says that I’m a model instructor and may even recommend me for another course next semester. If I keep this up, I might earn enough to cover gas money for my commute.”

This originally appeared on CronkNews.com. It is used here with permission.