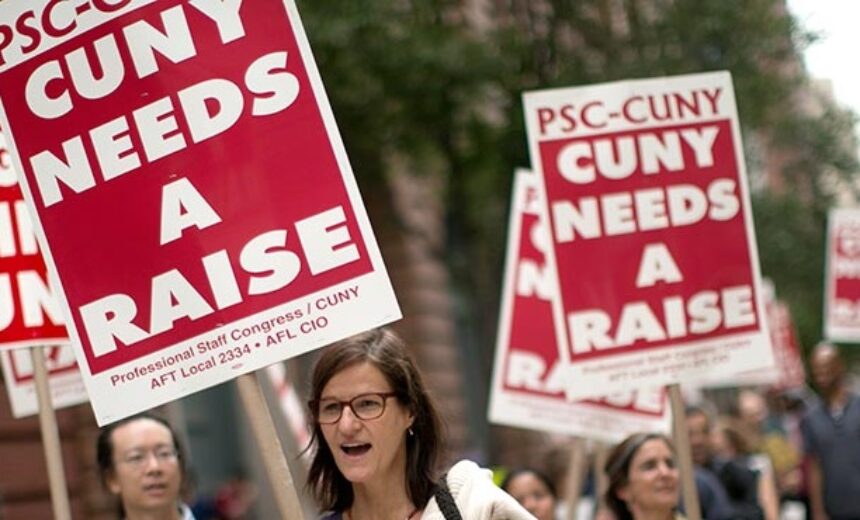 I can’t help myself. It’s just too tempting, and no one in the union leadership at CUNY can have my chalk holders broken. As you may remember, (or not) I have written several times about CUNY’s Professional Staff Congress, an affiliate of the AFT. To read my previous posts, look here, here and here. The union leadership over at CUNY is currently making an attempt to put down a revolt by adjunct members who are vehemently opposed to the proposed contract. In my opinion, that the PSC-CUNY part-time faculty members have been so vocal in pointing out the gross inequities negotiated on behalf of the full-time and part-time union members in the proposed contract represents a heartening change in business as usual at PSC-CUNY.

I feel I should start with MIKE VOZICK, Delegate BMCC, the guy who wrote a song about why union members should vote no:

“…and we are singing, singing for our lives…”

Vote No (V-No) to reverse widening inequities which cause disunity in our labor-congress and university.

V-No to say yes to a part-timer, full-timer alliance for equity….

V-No to promote deeper re-evaluation of the assumptions and approaches of PSC decision makers toward building ongoing patterns of membership activity in growing circles of commitment, to shape win-win contexts for bargaining, starting now with workload parity (9/6 rule modification) for multi-college adjuncts….

V-No for whatever, for no reason at all, just gut sense of the way forward.

Vote ‘No’ because you want full-timers and part-timers to appreciate each other and each other’s professionalism. Take courage, compassion, and intelligence to heart – choose growth over fear – vote No.

“If I had a hammer … I would hammer out justice.”

HARRY CASON Delegate, College of Staten Island had some interesting things to say, as well:

I have heard it over and over again. The strategy of the present PSC leadership is to raise the cost of adjuncts in order to remove the incentive that low-cost part-timers offer the university….But what has actually happened in the eight years the present leadership has been pushing their strategy? Let’s start with the raising of the cost of adjuncts. To raise the cost of adjuncts, one must raise their cost relative to full-timers. This has not happened. In fact, due to our contract agreements with management, we adjuncts have actually become cheaper relative to full timers! Full timers cannot expect adjuncts to work with them to get what full timers want, without giving us something in return, and respecting us as the human beings we are.

LENNY DICK Delegate, BXCC voted no, as well. He writes:

AN INJURY TO ONE IS AN INJURY TO ALL–BUILD UNITY WITHIN OUR RANKS
Aside from the gain of 100 conversion lines, the proposed settlement contains very little for adjunct members of our union. Neither seniority rules, decent health care coverage, nor pay equity has been won. In fact, the gap between the poorest members and those on top scale has widened. Winning a parental leave benefit for some PSCers is a step forward. But it is adding insult to injury to be told that the parental leave benefit will not apply to adjuncts!

SHIRLEY FRANK Delegate, York explains her no vote this way:

I voted “No” at the Delegate Assembly because I felt, and still feel, that it is important to convey a message to union leadership, and indirectly to CUNY management, that a large number of union members (particularly adjuncts) are extremely disappointed and dissatisfied with the terms of the proposed settlement. I feel that the union’s decision to focus on “competitive salaries” resulted in a contract that does nothing to address the exploitative two-tier system that has many of us so-called “part-timers” teaching essentially “full-time” workloads and still not earning a decent income, nor having any form of job security, academic freedom, or the benefits and working conditions that all members and fee-payers represented by our union should have….

As I said at the Delegate Assembly, I feel that the PSC leadership is concerned about oppressed people everywhere, except those right under their own noses — meaning the adjuncts, graduate students, and continuing education teachers who are supposed to be colleagues, who pay fair dues to be represented, but who continue to be regularly subjected to gross underpayment, second-class benefits, lack of job security, and miserable working conditions.

A contract that offers special advantages to the same people who are already relatively advantaged and no gains for those who are relatively disadvantaged** is, I feel, not one to which I can respond with anything but a “No” vote.

DOUGLAS MEDINA Alternate Delegate, HEO Chapter refutes some of the common arguments made by those who voted for ratification, and he asks some excellent questions:

….Several union brothers and sisters will essentially argue that this is the best contract we can get, considering the fiscal strain on CUNY and New York State, vis-à-vis other municipal unions. Others will claim that going back to the bargaining table will be “too risky,” given this fiscal strain. However, I submit to you that the time is now to dig-in our heels and fight back against the state and management. If not now, when? When we are able to suck our index finger and hold it up to make sure “the winds are blowing is the right direction”? As one of our sisters asked before, what is the union of your dreams? How long do we have to wait for the dream? What happens to a dream deferred?

Now, let’s hear from Marcia Newfield, who represents the interests of PSC-CUNY’s 5,000 active part-time faculty members within the union:

MARCIA NEWFIELD Executive Council (VP/ Part Time Personnel), BMCC writes:
The four part-time officers voted yes on the contract and sent a letter to that effect to the adjuncts which was also posted on the Delegate Assembly listserv. While we totally support the need for adjuncts to move towards parity in large increments and are aware that this contract does not do it, we believe that it is to our advantage to ratify this contract, both because of the gains that have been made and our intimate knowledge of management’s resistance to bending at this point. Some describe my saying that getting to parity will cost millions of dollars in addition to requiring a quantum shift of perspective as defeatism. Quite the contrary.

The only question is what is the best strategy to redistribute the pie and/or get a bigger pie. I think it is voting yes and collectively putting our shoulders to the wheel to gain support to pressure management to make changes, such as allowing the five schools that only pay for fourteen weeks to pay up.

Well, it turns out there’s a reason Marcia’s in a position to wait several years until the next contract is negotiated. Newfield earned $43,032 in her position with the union in 2007. That’s significantly more than the proposed full-time salary negotiated for a PSC-CUNY part-time lecturer under the auspices of the new contract that Newfield told the union’s part-timers to support. To support her decision to get behind the proposed contract, Marcia Newfield points to 100 conversion lines for adjunct faculty won in the proposed agreement.

The first line of the letter outlining the conversion line process from Matthew Goldstein, Chancellor of CUNY to Barbara Bowen, PSC-CUNY president, reads: “I write to inform you of my intention to create 100 full-time Lecturer lines over a two-year period that would be available to adjunct instructional staff. This initiative will take the following form:

The thing is that there is funding. Union leaders negotiated for that money to raise the salaries of CUNY’s full-time faculty, and to fund their new and expanded family leave and retention and recruitment programs.

PSC-CUNY union leaders, including Barbara Bowen, have tried cheap scare tactics by telling members that if the proposed contract is not ratified the union will (gasp) have to negotiate a new one which may or may not be as “favorable” as the one being offered to members. Here’s a news flash for PSC-CUNY union president and chief contract negotiator Barbara Bowen: That’s what the members pay you to do. Union members in virtually every field where workers are unionized have sent their negotiators back to the table. They do this when the proposed contract stinks. In this case, 5,000 part-time faculty at CUNY have gotten the shaft from their own New Caucus leaders.