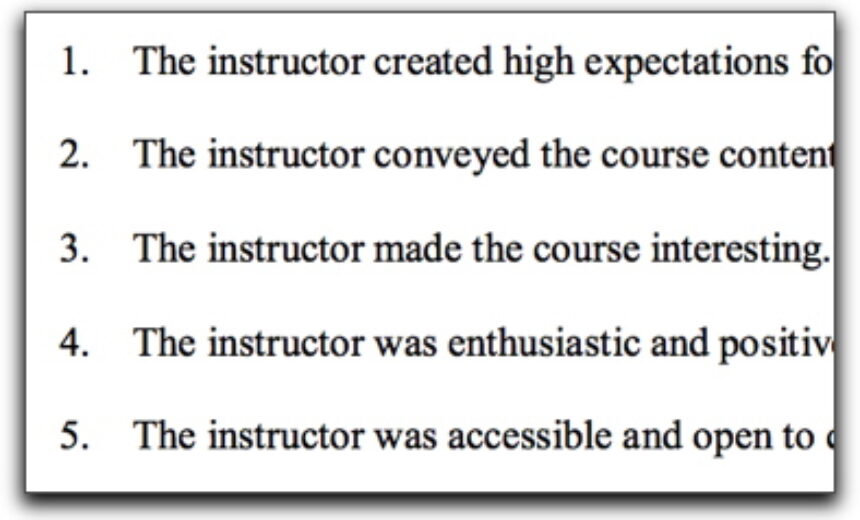 What are the most credible methods and evaluative tools to use when deciding whether to rehire an adjunct faculty member? This is a question that should be asked by hundreds of thousands of college administrators nationwide. Instead, what we get are lazy administrators content to have adjunct faculty evaluations done by the least credible method by the least reliable evaluators: student evaluations. It’s high time, someone smacked college administrators upside their leather office chairs and pointed out that academic research has repeatedly concluded that student evals are terribly biased against women and faculty in various academic disciplines.

A recently released study titled “Correlations, trends and potential biases among publicly accessible web-based student evaluations of teaching: a large-scale study of RateMyProfessors.com data,” once again concludes that there are significant problems with various biases in student evals.: “On average, professors in science and engineering disciplines have lower ratings than in the humanities and arts. When looking at RateMyProfessors as a whole, the effect of a professor’s gender on rating criteria is small but statistically significant. When analysing the data as a function of discipline, however, the effects of gender are significantly more pronounced.”

At this point, any administrator in any two- or four-year college or university in the country who relies either in whole or in large part on student evaluations to make decisions about the quality of any faculty member’s teaching, is incompetent. The excuse from administrators is frequently that there are too many adjunct faculty employed in the department/college/campus or university to use any method other than student evals to evaluate the adjuncts’ teaching. Really? I find that difficult to believe, because there is almost an equal number of administrators/professional support staff and non-tenured faculty currently employed in the U.S.

Between 1995 and 2011, the faculty in four-year colleges and universities grew by nearly 470,000, or 72.4 percent, while non-teaching professionals grew by nearly 400,000, or 75.2 percent. But of the faculty positions added, nine of every ten were non-tenure-track and nearly six of every ten were part-time; of the non-teaching professional positions, more than nine of every ten added was full-time. According to Fall 2011 data from the National Center for Education Statistics, there are just over one million college administrators and professional support staff employed in U.S. colleges and universities. That’s right: one million college administrators were pushing paper around in colleges all over the country in 2011, the latest data available.

Department of Education data collected for fall 2014, document a faculty workforce of 1,569,207 in two- and four-year Title IV–participating United States colleges and universities. Of the 1.57 million college faculty, 52.9 percent had part-time and 19.4 percent full-time temporary appointments with no eligibility for tenure, approximately 1.1 million faculty members.

The majority of adjunct and non-tenured faculty are women. So not only are women getting the long end of the non-tenured appointment stick, they are being forced to undergo evaluations that produce demonstrably biased results. Then, department chairs, deans and other administrators use the results of those biased evaluations to decide whether adjunct faculty should be retained, paid more and/or promoted. Adjunct faculty looking for tenure-line jobs, then, are really getting shafted. Hiring committees often request “evidence of teaching effectiveness” in the form of—yep, you guessed it—student evaluations. One tenure-line job posting I saw recently asked for eight years worth of student evaluations. According to these studies, in certain academic disciplines women are consistently rated lower by student evaluators than their male counterparts for no reason other than the faculty members’ gender.

The other question I have is about the education unions whose affiliate and local contracts require faculty members to be evaluated by students and those student evaluations used in hiring, pay and promotion decisions. Why on earth would a faculty union continue to allow student evaluations to be used at all in such critical career decisions made by administrators? Aren’t unions supposed to bargain contracts in the best interests of members?

Authors of the most recently released study on the reliability of student evals. pointed out that, “Our analysis would support an argument that the use of SET (student evaluations of teaching) has adverse impact on female instructors, at least in the two settings we examined. Eventually, lawsuits will lead universities to do the right thing, if only to mitigate financial risks.”

It’s only a matter of time before the first adjunct faculty member sues over the use of student evaluations in hiring, pay and promotion decisions made by some lazy, chuckleheaded administrator. Then and only then, I believe, will we see hundreds of thousands of administrators get their heads out of their private offices and quickly devise fair, credible, competent and fair evaluative tools and methods for the 1.1 million adjunct faculty teaching the majority of this country’s 21 million undergraduate students.