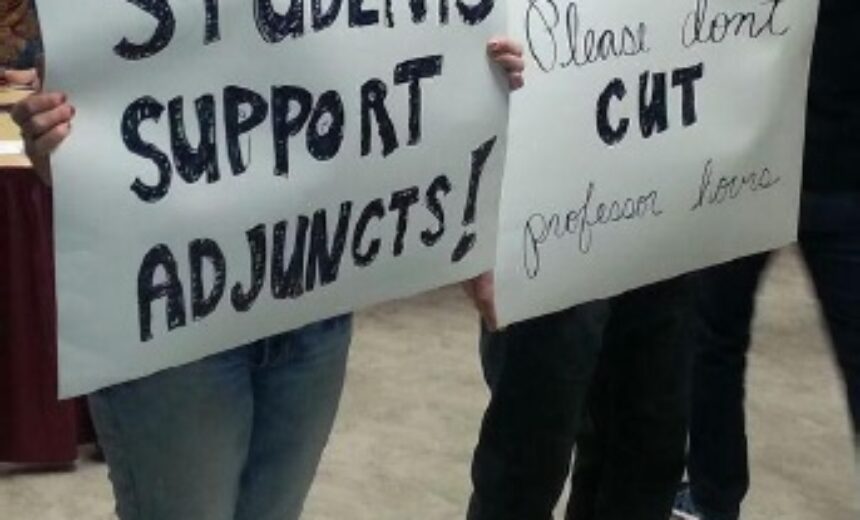 by Becky Stieber Villarreal
The road to health benefits for adjuncts at Austin Community College (ACC) has been long and arduous. Since the college’s inception forty years ago, it has been plagued by its overreliance on contingent faculty. Today, of the nearly 2000 faculty members whoteach at the mega-college that now sprawls across Central Texas with well over 100locations, approximately 70% are adjuncts. In a brazen response to declining enrollment, the college recently opened the doors to three new campuses and purchased a shopping mall for $15.9 million that is conveniently adjacent to the college’s six -story administration building.
Although they have made impressive gains in fair pay and shared governance, adjuncts at ACC have made little progress in their quest for health benefits. In recent years, the college’s  Adjunct Faculty Association (AFA) and members of the ACC-AFT teacher’s union spearheaded state legislation allowing adjuncts to buy the same insurance that full-time employees get for free. Adjuncts who buy in to the plan (about 100) pay about 650 dollars a month for health and dental. Even though the law has a provision wherein the college could help offset the lofty costs, repeated meetings between the AFA andthe administration and fervent appeals to the Board of Trustees have proven to no avail.
In mid-November of 2013, the human resources department blind-sided adjunct faculty with a memo in response to the Affordable Care Act (ACA). The memo stated that adjunct faculty would be limited to 28 hours a week beginning in January. Shortly afterwards, administrators met with a group of incensed adjuncts at their fall meeting, spelling out the new rules in a PowerPoint presentation. Using the Texas Retirement System (TRS) formula of 2-to-1, the administration said that adjuncts would be limited toteaching three classes a semester or 18 clock hours. In addition, the TRS formula wouldlimit part-time faculty who work in other areas of the college. In addition to their teachingloads, adjuncts with three classes, who had been clocking up to 19 hours per week inthe Learning Labs, would now be limited to 10 hours, cutting their monthly income bymore than $1,000.With news cameras rolling, part-time faculty vented their frustration as they left the meeting.
“It seems like they are burying their adjuncts,” Adjunct Professor Marla Deansaid in an interview with KXAN News. “They’re going to make their budget on our backs.”
The 2-to-1 formula did not bode well with some adjuncts: “Besides class time,” Dr.David Albert, government professor and vice-president of adjunct faculty for the ACC- AFT teacher’s union, writes in a recent publication of the  ACC Adjunct Advocate,”Adjuncts prepare and revise lectures [and] PowerPoints . . . read academic journals intheir discipline; respond promptly to student email; grade papers; hold office hours;attend faculty meetings; write letters of recommendation, and fight with substandardcopiers and computers that … constantly break down.”Despite the overwhelmingly negative press, the administration held firm. In the November 25th  edition of the  Austin American Statesman, Alexis Patterson, a college spokeswoman, said that extending health benefits to all was “not a sustainable option”because ACC already spends $14 million a year on health coverage (for full-timeemployees) that runs about $8,000 a year per person. At the December 3rd  Board of Trustees meeting, adjuncts, as well as other concerned ACC employees and members of the Austin community, expressed their indignation. Former board member and adjunct advocate, Dr. John Worley, stood at the dais and reminded the administration that board policy mandates that “it is a goal of the College that adjunct faculty whose total work for ACC equals half-time or more annually haveadequate health insurance benefits.”

Worley warned board members that he would do “everything in his power”  to defeat theupcoming $500 million bond election in November 2014 if the college persisted inimplementing their proposal to cut adjunct hours to avoid paying for health benefits.
Based on the college’s past history, Worley said, the bond will pass only if “the college is united.”
In the December 13th issue of  The Austin Chronicle, ACC Board of Trustees member Tim Mahoney said that he was stunned when he first learned of the memo, saying, “In order for us to be engaged constructively with this uncertain future, we need to have[an] engaged faculty and staff, from the highest dean to the most important clerk, and Ido not see that memo as an example of that kind of coordination for building a commonfuture.”Local state representatives, led by Rep. Donna Howard (D-Texas), called a meeting todiscuss the ACC administration’s interpretation of the ACA. Congressman Lloyd Doggett, a strong supporter of the ACA and President Obama, also weighed in with hisconcern that ACC administrators were misrepresenting the intent of the health careinitiative.
A few days before the winter break, Learning Lab managers (who depend heavily onadjuncts) were pleased to learn that their adjunct tutors would be able to continueworking up to 19 hours a week. However, they were told, this was just a temporary fix.Once the ACA goes into full effect, the rules could change again and those teaching three classes could be limited to tutoring less than 10 hours a week.
At the January 21st  board meeting, impassioned students stood at the back of the roomfor two hours, holding signs that proclaimed, “We Stand with the Adjuncts.” With security guards on alert, several of these students, taxpayers, and adjuncts went beforethe board and expressed their concern for adjunct professors who do not haveaffordable access to health coverage.
After the citizens’ communications, ACC President Richard Rhodes  said he wastroubled by the misinformation in the media. He said that the November memo was “just a conversation” and that no hours had been cut and that no one had lost their benefits.Ben Ferrell, executive vice-president of finance and administration, added that ACC ismore generous than other community colleges in Texas in regards to pay and even intheir response to the ACA. For example, Ferrell said, Dallas Community College Districtis asking adjuncts to choose either tutoring or teaching; their adjuncts will not beallowed to do both. He reminded board members that the law says that state fundscannot be used to fund health benefits for adjuncts and that the cost to the college couldexceed more than two million dollars a year. After Rhodes and Ferrell made their case for the administration, the board responded.Longtime board member Allen Kaplan said that in 1994 some board members pledged to make adjuncts part of the ACC family, but they were told that they could not help withmoney. They were told that adjunct pay could not be tied to full-time pay. At the time,adjuncts were not even allowed on committees. Those board members who rallied forfair treatment and equitable pay, Kaplan said, “were on the right side of history.” This is not about the ACA, he said, his voice rising, “we need to do the moral thing by adjuncts.”
He said that he would like to see ACC contribute 50% toward adjunct health insurance.
Board member Betty Hwang said that we need to resolve this issue quickly with thebond election looming ahead because ACC cannot afford more bad publicity.Some of the board members echoed the administration, saying the college has not cuthours or coverage (even though there is evidence to prove otherwise), and that ACCneeds to reexamine the policies before making a final decision.Board Chair Jeffrey Richard said that something as important as healthcare can’t behandled with memos and meetings, and that there was a failure in the process. Richard admonished the administration because even though they claim that the memo was not a mandate, it “felt real” to those who read it. Being on the “right side of history”  is important, Richard said. However, he queried, what is the college willing to give up?Chagrined, President Rhodes apologized for any misinformation. Meanwhile , ACC adjuncts still don’t have any definitive answers about the college’s willingness to set aside budget dollars for adjunct health benefits. The good news is thatthe administration has tentatively agreed to create 22 more Instructional Associate jobs,which are full-time, benefits-eligible positions for adjuncts that both teach and tutor. The bad news is that adjuncts don’t know what to expect next.
Not only do they have to worry about health care, but, like other contingent faculty in our country, they are foreverbattling low pay and unfair treatment. One adjunct, who prefers to remain anonymous says, “What I don’t like is the absence of job security . . . the sense that one is alwaysone small mistake or computer ranking away from losing significant income.”
President of the Adjunct Faculty Association Richard Cutler is cautiously optimistic: “For years the board of trustees has been . . . riding the expansion juggernaut . . .Therefore, we [adjuncts] owe students who showed up at the Board of Trustees meeting a huge THANK YOU, and [seeing] ACC Trustees speak on our behalf was truly gratifying.”
ACA, adjunct faculty, Austin Community College, health care, higher education news, Obamacare, part-time faculty