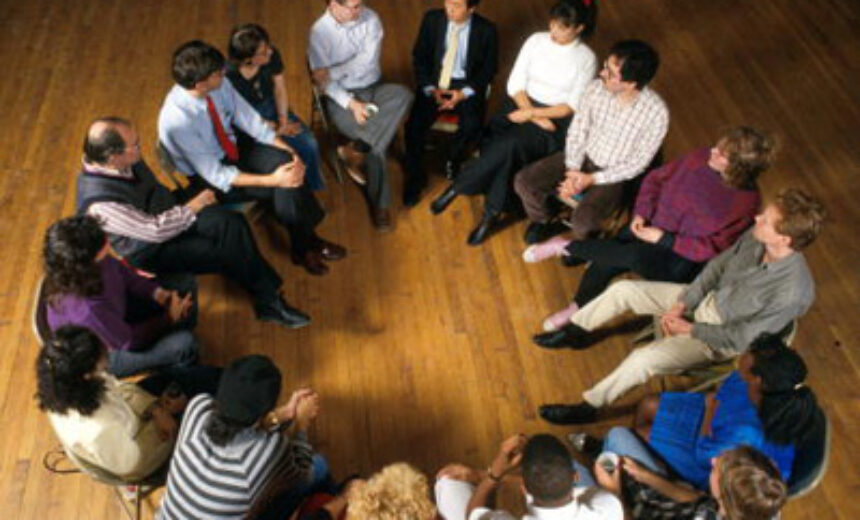 “I had no idea my professor was a recovering adjunct,” said one student.

“We are powerless against academia,” is the first step of a new campus 12-step group guaranteed to appeal to 92 percent of those teaching at Minima College.
The first-ever Adjuncts Anonymous (AdjAnon) gathering promises to provide the last gasp of air for floundering faculty suffering from compassion fatigue, grading fatigue and plain-old fatigue.
“Don’t let lack of faith in a Hire Power keep you from meetings,” urged leader Heidi N. “You can put anything in place of Hire Power, if you are skeptical. For some, it’s the dream of a parking space. For others, it’s a set of papers without a typographical error.”
“Not only are we powerless against academia, we are powerless against damning statistical studies to prove our incompetence – and our own futile urge to serve academia nonetheless,” added assistant leader John B., who often turns to humor to lighten his load. “How many adjuncts does it take to change a light bulb? ‘As many as we can squish into the work room.’” he quipped, adding: “Wait, we don’t have a work room! Ha, ha.” He then bolted to his car after teaching an 8 a.m. English class at Minima, then drove south to Utter College for back-to-back 10 and 11 a.m. classes then to the for-profit Cash College (where he tutors from 1 to 5 p.m.) and then returns to Minima to teach from 8 to 10 p.m., after a nap in his car. With so much to do, when will he get to meetings? He said that the only time classes are not scheduled in his corner of the state is 3 to 4 a.m. on Sundays, and that will be his home group.
Even as the group began to form at Minima, across campus the minority of those with tenure have energized, working out in the gym and jogging, for the new annual event: “throw adjuncts under the bus.” Once thought to be strictly a metaphor, the TAUB event is, in fact, orchestrated by faculty members worried at the adjuncts’ emboldened, collective voice as well as their teaching prowess.
Meanwhile, freshman Brock Bramme pondered the implications of the new AdjAnon group.
“I had no idea that my English teacher last semester was a recovering adjunct,” Bramme said. “Had I known, I would have pushed harder for that grade change I didn’t deserve.”
This orginally appeared on CronkNews.com. It is used here with permission.